There is this romantic perspective of castles. We can probably blame Disneyland for the illusion:  the image of a castle is often of rings of walls, towers and a great keep occupying the centre. The reality is not quite the same. Castles were constructed over huge timeframes – centuries. They often changed hands, past from one prominent family to another, and each owner altered and added the latest fad in castle design. What we see left in those castles still standing is a composite and not the original castle. 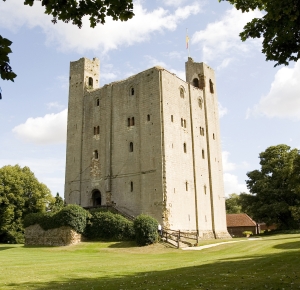 The Normans had a simple approach to castle building. A hill (motte), keep (to house the family), bailey (outer wall) and a few defensive towers. Very few stone keeps survive into modern times unaltered. The most famous keep is probably the Tower of London – the White Tower.  However, that’s not the one I like best. Hedingham Castle was constructed in the 12th century with a square keep and it stands 21 metres tall. Built by the de Vere family, who later held the title of Earls of Oxford (Hedingham is no where near Oxford), it eventually passed to a different family who have lived on the estate for 250 years. However, not in the castle. In the grounds is a manor house.

The keep still has wooden floors, a roof and some sample furnishings. It’s great to visit and show kids what a normal keep might have looked liked for those who inhabited it. The views are spectacular too.

The earliest castles in the UK have mostly fallen in ruins. If they survived the medieval wars, then Oliver Cromwell slighted them after the English Civil War to ensure they ceased to function for military purposes. Some went on to become palaces for the rich, but most medieval castles crumbled due to disrepair and the stone was taken to build other humbler abodes.  Hedingham has managed to offer both: it remains part of a family home, and is still intact and maintained as it was in Norman times. A rare treat.

Country home with original garden shed. Built from stone, the multi-purpose shed is suitable for storing especially long hoes and cannons. It includes a cellar, which can provide storage for wine and unwanted relatives.  Excellent views of garden, which is handy for spotting trespassers and shooting them down with arrows. The structure can withstand hurricane force winds.

Flying a flag on the rooftop is not compulsory.