Yesterday I briefly visited Kenilworth for  a joust, today I’m back again for my letter K. Kenilworth is jam packed with history and famed for two notable inhabitants: John of Gaunt and Robert Dudley.

John of Gaunt, Duke of Lancaster and a son of Edward III, took ownership of the castle and constructed a great hall. The Duke of Lancaster married three times and his descendants formed a triangle of families who vied for the crown for decades: Yorks (white rose), Lancastrians (red rose) and eventually, through the legitimising of John of Gaunt’s children by his mistress and third wife, the Tudors (white and red rose). The tale of his mistress, Katherine Swynford, is worth a read and the best book I know is Anya Seton’s Katherine. 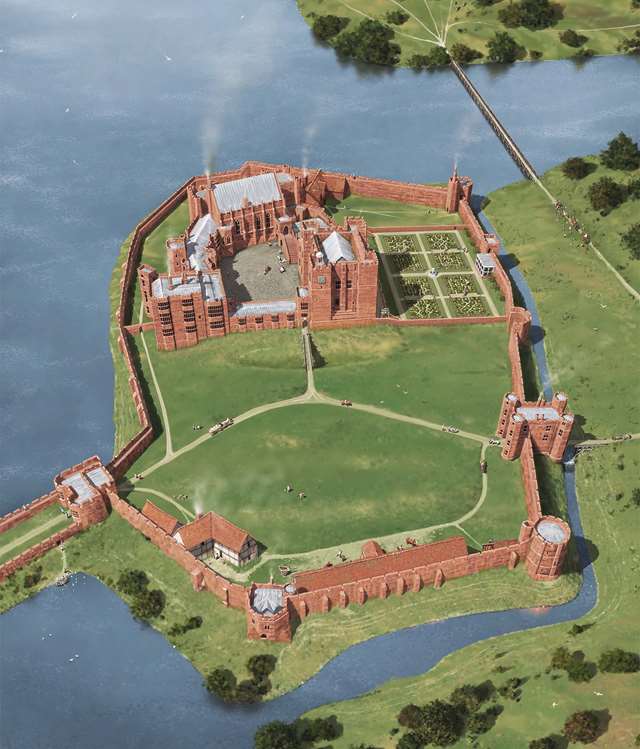 Computer generated recreation of Dudley’s Kenilworth. John of Gaunt’s great hall is at the top. The Leicester tower is on the right and south of the garden.

The castle survived the War of the Roses and remained as crown property until granted to the Dudley family in 1553. Robert Dudley, the Earl of Leicester was a great favourite of Elizabeth I. Now if only he’d not been married already, she might have chosen him. After his first wife died in mysterious circumstances (she fell downstairs), he wooed his queen using Kenilworth as the bait.  He modernised the castle, added a four-storey tower – the Leicester building, which is still intact –  a deer park and a privy garden for his queen.

This garden was lovingly recreated based on archaeology and the content of original letters. Still maturing, the garden is a replica of what Robert hoped would enthral his queen during her 19 day visit in 1575 – the queen was well known for bankrupting her lords whenever they hosted her, what with the food and entertainment costs. This progress of visits across the country was common for royalty and saved them a penny or two. The stay at Kenilworth was the longest and likely to have made a major hole in Robert’s purse.

It was Robert’s last extravagant attempt at winning over his childhood sweetheart. However, it failed. Although forever fond of him, Elizabeth never married. Rejected Robert secretly married Lettice Knollys and ended up exiled as a consequence.

Here’s a snippet from a book I might one day finish writing. Two friends visiting the ruined castle.

Emma and Yvette arrived at the Elizabeth Garden, a recreation of an earlier long forgotten version. Statues, obelisks and dainty squares of shrubbery, it seemed far too neat and formal to Emma, as if such elegance could be created from nature. To her, gardens were like her parents’ backyard, rugged and wild with weed-strewn lawns and overgrown flowerbeds. She preferred the wilderness to the refined, the chaos to the contained plants in their boxes and neat beds.
“It’s very pretty,” said Yvette. “Very tidy. I wonder if they walked like us – amongst the paths and talked about inconsequential things?”
Emma said nothing. She didn’t think she and Yvette had been talking about trivial matters.
Yvette turning to look back at the castle behind them. “He did marry again, didn’t he? Dudley.”
The question dragged her out of deepening thoughts. “Yes. Lettice Knolls.”
Yvette chuckled. “From Elizabeth, the Great Queen Bess, to somebody named Lettice. I bet she was a bit limp after the grandeur of a queen.”