Abbeys were often built in the middle of nowhere to ensure the temptations of town life were well away. Monks could then devote themselves to their offices while lay workers toiled to keep the money pouring in. However, it wasn’t always peaceful. In Yorkshire, at St Mary’s Abbey, at riot broke out in 1132 and 13 monks were expelled for their determination to return the life of the abbey back to the origin Rule of St Benedict.

These exiled Benedictine monks were given land  by the River Skell by the powerful Archbishop of York. From humble beginnings, Fountains Abbey developed into a huge complex and later, the biggest monastic ruins in England and a World Heritage Site.

As for those early expelled monks, they turned to the Clairvaux Abbey in France and the Cistercian Order founded by Saint Bernard – this order proliferated in the 11th Century Europe – and Fountains became the second Cistercian abbey after Rivaulx to be established in the North of England. The new order suited their needs: austere and self-denying.

It wasn’t all easy. In 1146 an angry mob burnt down the abbey. Only the church was left standing. It seems that the election of the archbishop who supported the monks stirred up rivalries and it took until 1170 before stability arrived at Fountains, allowing it to expand and prosper. The abbey had 70 acres of land enclosed by a wall and the stone church was completed in 1170 at 91m long.   A lantern crossing was added in the late 12th Century, the famed Chapel of the Nine Altars in the 13th Century and the 49m tall tower added to the north transept just before the Dissolution of the Monasteries. 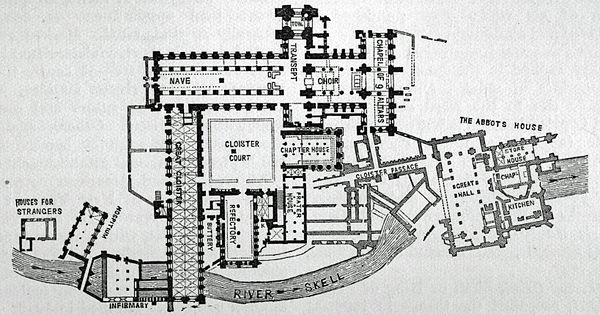 Fountains made its wealth from sheep. Wool production boomed in Medieval times. The abbey also relied on lead mining, cattle breeding, horse rearing and stone quarrying, turning the place into a small industry with the church at its centre. However, its success attracted raiders from Scotland who brought about an economic collapse and the Black Death probably didn’t help either. By 1539 when the abbey was dissolved, the monks might have been happy to be pensioned off. The vast abbey must have been a challenge to maintain.

The abbot’s house was one of the largest built and straddled over the river on arches. Little is left to see of this house and the extensive water management system that helped maintain all of the abbey’s activities. 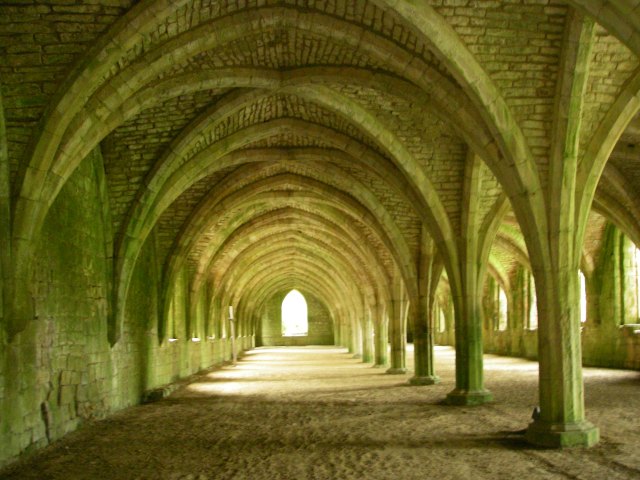 What is left is the awesome vaulted roof of the dormitory cellarium, which runs the length of the abbey at 91.5 meters. The light manages somehow to creep in and turn the stone golden. It doesn’t look cold, but it must have been, since Cistercian weren’t allowed to heat their monasteries with the exception of one room – the warming house – which was heated by a solitary fire.

Today, the estate is part of the Studley Royal Water Gardens and is a beautiful place to walk around. One of the biggest attractions in Yorkshire. When you arrive at the visitors centre there is nothing to see of the vast ruins. You walk down the valley, through the trees and level to the path is the top of the tower. Down you go, until eventually you emerge on a plateaux, the valley floor. Now, you can explore and appreciate the peaceful sanctuary those expelled monks must have seen when they started to build a small wooden church. 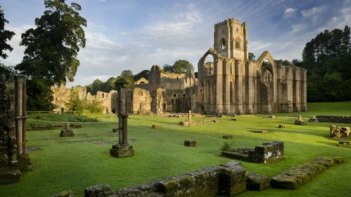