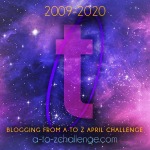 Letter T of my Theatres through the Ages is an obvious one!

I’ve mentioned the patent theatres a few times on my posts. The royal patent is a legal instrument issued by the monarch to grant a monopoly. It’s usually applied to inventions, but it also was given to theatres, licensing them in effect to perform. Only patent theatres – the Theatre Royals – were allowed to put on serious plays. Hence the proliferation of other forms of entertainment in non-patent theatres. The act, which by the time of its demise was losing its status, ended in 1843.

In Britain there were thirty-five Theatre Royals across the country in towns and cities, although not necessarily active all at the same time. Some, sadly, are long gone, the buildings demolished, or closed due to upkeep. The few that have survived invariably are not the original theatres that obtained the patent. It’s worth mentioning the biggest and the best.

Covent Garden – now designated the Royal Opera House, was originally known as the Theatre Royal, then always Covent Garden, began life as a playhouse for a century until it turned to ballet in 1734 then opera. The current building is the third theatre. The first was built in 1728 after a patent was award to William Davenant in 1662. Only two patent theatres were allowed in London. It took a while to acquire the funds and land, which turned out to be next to a fruit and veg market – Covent Garden, the market remained until 1974. Fire burnt the theatre down in 1808.

The second theatre, designed by Robert Smirke, focused on variety acts. The price of seats went up to recuperate the costs, and the audience in turn booed and hissed during performances in protest. Joseph Grimaldi, the theatre clown, made his name here, and the actor Edmund Kean collapsed on stage playing Othello and died two months later. In 1843, Covent Garden reopened as the Royal Italian Opera, but after a performance of Wagner’s Ring Cycle, the ‘Italian’ part was dropped. The theatre burnt down in 1856.

The third Covent Garden theatre was built by Edward Middleton Barry, and it remains at the heart of the existing building. The theatre became the Royal Opera House in 1892 and seats 2200 people. Its splendour remains intact and even after renovations the horseshoe auditorium is unspoilt.

There was one other Theatre Royal operating at the same time as Covent Garden, it is the oldest theatre site in use in the UK. The Theatre Royal, Drury Lane. The first of four theatres was built in 1660s after the end of the Puritan ban on playhouses and a Theatre Royal was built for the King’s Company. Charles II was a big fan of the theatre and his lover Nell Gwynne perform on this stage. The theatre, just like The Globe, had no roof and performances were always matinees to allow for daylight. The theatre missed the Great Fire of London, but burnt down in 1672 instead.

Theatre two has unclear origins. The theory that Christopher Wren designed it has been debunked. The King’s Company couldn’t afford the costs and merged with the Duke’s Company. Seating was divided by class, and there were the expensive box seats. There was a series of scandals involving various managers and embezzling, including the son of William Davenant, the original patent holder. The patent was renewed in 1747 by David Garrick, who bought the theatre. He kept the theatre for many years, and was a well respect actor who brought Shakespeare to Drury Lane. Under his management, spectators were barred from the stage for the first time – something you would have thought was compulsory already!

Children were frequently hired as extras at Drury Lane, including the young Joseph Grimaldi.  The popularisation of a white face clown is down to Grimaldi especially in Harlequinades, which was when in a pantomime the clown took the lead role in a mime.

The theatre was demolished in 1791 and replaced with a huge one (3600 seats): iron columns, five tiers, and with the exception of churches, was the tallest building in London. A water tank (useful for aquatic theatre scenery) in the attic and the iron safety curtain were part of its survival plans. George III was nearly assassinated in the royal box by an insane gunman, so drama off as well as on stage. Unfortunately, even with the water tanks, after fifteen years, guess what? The ‘fireproof theatre’ burnt down in 1809. 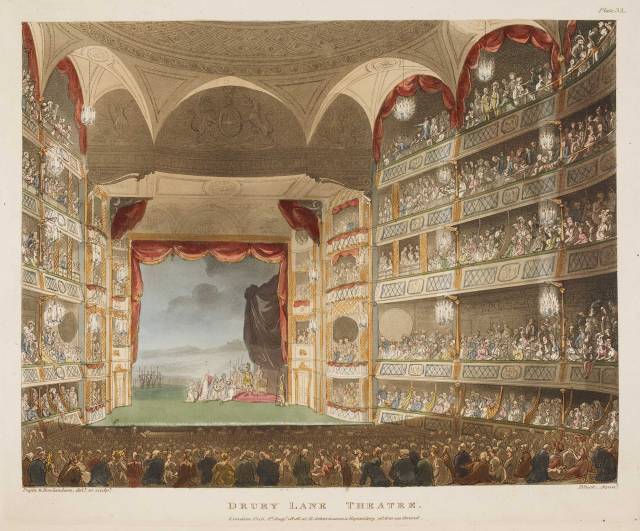 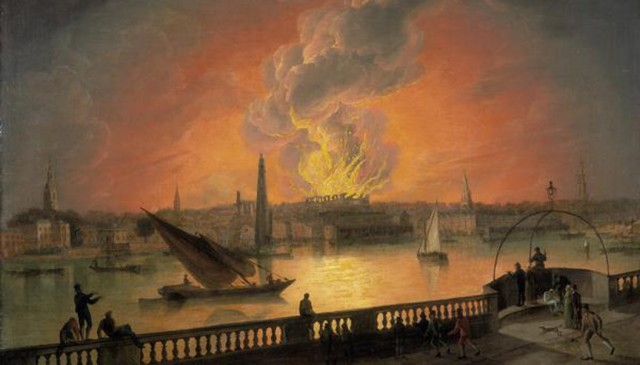 The present Theatre Royal, Drury Lane, was built in 1812. The number of seats was cut down by 500 due to the feeling of lack of intimacy with the audience. Concern was expressed at the dearth of serious plays, so Samuel Arnold and Edmund Kean were tasked with turning the theatre into a centre of national culture. After 1843, the end of the patent period, the theatre rose and fell in fortunes. “Shakespeare spells ruin; Byron bankruptcy,” to quote one manager.

The auditorium is still one of the largest in the West End. The latest restoration in 2014 cost £4 million, and keeps the theatre in its original Regency style.

Drury Lane isn’t the most perfect example of Regency Theatres, that honour goes to a particular favourite of mine: the Theatre Royal, Bury St Edmunds.

One of only eight Grade I listed theatres in the country, built in 1818, small in capacity – just 360 seats – it has survived without much alteration since its construction and hardly any interference from Victorian influences. It’s had its ups and downs, too. At one point, when closed, it was used by the brewery opposite to store barrels. Now, thankfully, it has a 999 year lease with the National Trust, and with luck will stay the same so I can continue taking my kids to the Christmas Pantomime.

← Sadler’s Wells – the home of dance
Upstage – the theatre words →