The Windmill “we never close” and the war theatres. 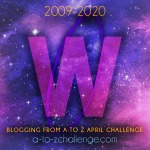 What happened to theatres during war time? It’s something that feels particularly relevant given the level of disruption with which we are currently living.

During WWI theatre was considered morale boosting for both civilians at home and soldiers. Entertainment was valued, although some also criticised its continuation as bad taste when so many were dying abroad. Tales of good and evil, and those extolling ‘English’ values sold well. People flocked to Music Halls.

With many young men fighting, and public transport in a poor state, putting a show on was a struggle, many performances were used to raise funds for theatrical equipment for soldiers themselves.

With shows proving popular, an entertainment tax introduced in 1916 triggered an increase in ticket prices, impacting those with less income. The tax was supposed to end in 1919 but continued into the 1960s.

Actors also signed up to fight. Amateur troupes of entertainers supplemented those that went out to the Front to serve, eventually the two, amateur and professional, came together to form The Gaieties which toured across the Western Front.

Over three thousand plays were written during the First World War.

The Second World War brought greater problems for the theatre industry. London and other big cities were bombed. All theatres were required to close, but did they? The Old Vic became a shelter, and the theatrical company took to the road touring, visiting Welsh mining villages and the industrial northern town. It turned out to be its most financially successful period. But for most, the war was diastrous. Overnight, hundreds of actors were unemployed, and those on tour, stranded. 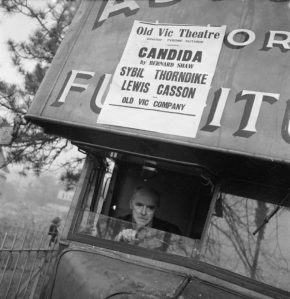 George Bernard Shaw called it ‘a masterstroke of unimaginative stupidity’ and there was calls for the London theatres to reopen to provide that important morale boost. Unfortunately, the start of the Blitz reinforced the closures. A war-relief fund was created by Equity, the actors’ union.

Theatres were bombed – Drury Lane, Saville Theatre, the Prince of Wales in Birmingham, Argyle in Birkenhead, and the Prince’s Theatre in Portsmouth, which killed eight children watching a matinee.

Rationing restricted set designs and costume making, so a theatrical rationing committee was created to help decide who got what. To avoid evening bombing raids, the theatres advised against the usual dinner and show routine, and offered more matinees, when daylight reduced raids.

After the war, there were new initiatives put in place to help rebuild the theatre world with the start of the National Theatre movement and the creation of the Arts Council.

There was one theatre that never closed during WWII. The Windmill, which exemplified the “carry on regardless” attitude. The venue was bombed in 1940, badly injuring one actress, so when there was bombing raid, a warning was announced on stage, and the audience could choose to stay or go.

The Windmill theatre took its name from the street name – The Great Windmill Street, named after a windmill that stood there in Charles II time. A cinema was on the site, then in 1930, it was bought by Laura Henderson, a wealthy, eccentric widow. She, in partnership with Vivian van Damm developed the idea of the Revuedeville. A continuous stream of variety acts from 2pm to 11pm. It wasn’t a money spinner. The real breakthrough came with nude tableaux vivants, and unlike the stocking clad ones of the prudent Victorian era, these girls were naked.

Van Damm and Henderson managed to convince the Lord Chamberlain, the man responsible for censoring theatres, that stationary nudes were no different from nude statues that filled the hallways of stately homes and galleries. The Windmill Girls became well known in their motionless poses and the ruling was made – if it moves, it’s rude. 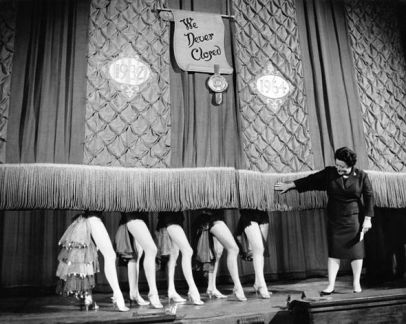 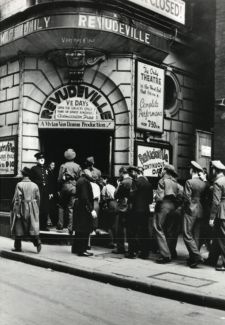 During the war the Windmill theatre’s motto “we never close” was humorously modified to “We never clothed.”

The Windmill survived the war, but the theatre ceased operating in 1964. But during that final post war spell it changed its format again, and was home to many great comics: Tony Hancock, Spike Milligan, Harry Secombe, Peter Sellers, Michael Bentine, Bruce Forsyth, Arthur English, Tommy Cooper, and Barry Cryer.

So there is always hope for a brighter, cheerier future, even when things are not normal.