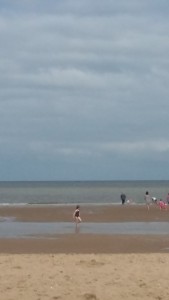 There’s more to a beach than sand. You can anticipate the waves, the pebbles and shells, a little seaweed or a lot, or none at all, as was the case with Talacre Beach in North Wales, but what makes each location different is the landscape and the view across the sea.

This was our second outing to this beach, which is situated close to the estuarine area of the River Dee. The open water is busy with wind turbines, platforms, and the distant shipping lane of the River Mersey where large cargo ships or oil tankers head towards the industrial havens further inland.

With so much going on, it’s not surprising that the lengthy beach, which seems to drain of seawater in a matter of hours, needs a lighthouse to protect the ships from grounding on the sandbanks. The Point of Ayr lighthouse, rusted with the paint peeling off its walls, isn’t used any longer. Modern shipping doesn’t need to know about sandbanks when it has GPS – it actually fell out of use by the end of the 19th century. Built in 1776, at 18 metres tall (a shorty for a lighthouse) it makes a rather solitary structure, boarded up and neglected, except by the children who climb its steps and stand outside the locked door. Mounted on a concrete plinth, within hours as the tide races is, it will become an island and inaccessible. The lighthouse is supposedly haunted by the ghost of a lighthouse keeper.

Behind the beach are sand dunes and salt marshes, hived off by fences to prevent holidaymakers ruining the habitats. Then further along the beach, barely visible, the beginnings of hills and the peaks of mountains of inner Wales.

The ice-cream van was parked in the car park. Striped wind breakers decorated the driest parts of the sands. Plastic bucket and spades littered the beach along with camper chairs and picnic blankets. All illustrations of the flotsam and jetsam of holidaying families. 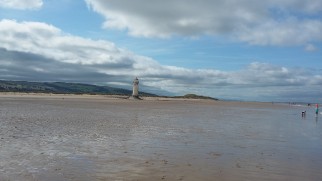 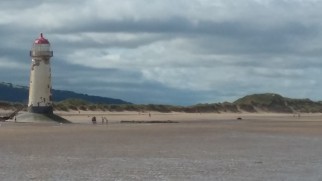 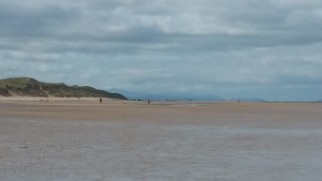 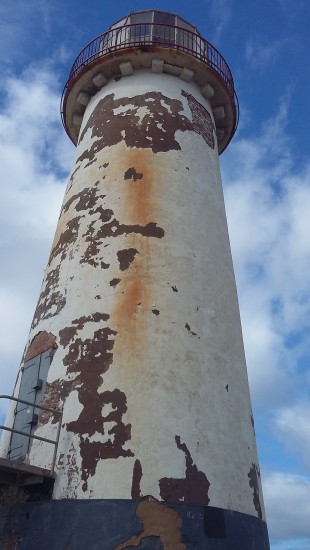 The kids had fun. I read my Kindle.

Nothing quite like sitting on a beach on nearly the last day of summer.