Cathedrals: the old, Canterbury, to the new, Coventry. #atozchallenge

There is a blurring of the lines between the great churches of abbeys and cathedrals. To me, as a visitor, they both offer the same experience and seem so akin as to be indistinguishable. However, it’s obviously more complicated than that.

The word Cathedra is derived from the Latin word for chair. It is presence of the bishop’s throne that makes a cathedral what it is. From that seat the bishop supervises the diocese. The cathedral is the mother church of that diocese and holds major events such as ordinations of priests, festivals and confirmations. The Church of England as 42 dioceses and the Catholic church another 22 dioceses. Within the CofE the dioceses are organised under two archbishops: Canterbury and York.

The CofE cathedrals weren’t all necessary built for the bishopric role. Fifteen have always been cathedrals of which nine are Old Foundations and secular (the clergy weren’t members of a religious order) and six Monastic Foundations in origin. Henry VIII founded another five cathedrals (New Foundation) from dissolved abbeys. During Victorian England another four Greater Churches (big churches or ex-abbeys) became cathedrals to cope with population growth and twenty-one parish churches were added, then others in the twentieth century were designed and built specifically as cathedrals including Liverpool, Truro, Guildford and the rebuilt Coventry.

Taking two – Canterbury and Coventry – and you recreate the complex history of cathedral building.

Canterbury is the seat of the senior Archbishop and the Mother Church of the worldwide Anglican Communion. In 597 AD Pope Gregory sent Augustine, a missionary, to England. He established his seat at Canterbury and became the first archbishop. His church was damaged by Viking raids. 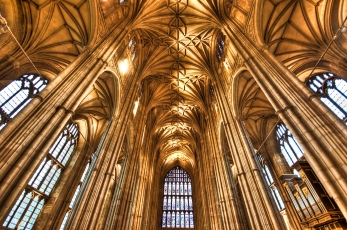 Over time, like many cathedrals, it was constructed, expanded and repaired. Those masons who began building cathedrals never saw the completed cathedrals because to some extent they never were completed. Fire in 1067 destroyed Canterbury. Lanfranc of Caen rebuilt it in 1070.  Architects were brought over from Continental Europe with their Gothic ideas and they reshaped the Norman style of rounded arches into pointed ones. The East wing was destroyed by fire in 1174, the choir rebuilt 1180, the west tower, which had a spire, was replaced in 1834 due to structural weakness.  On and on it goes, and still does as each cathedral struggles to raise funds for building maintenance.

Location of the shrine

Canterbury gained most fame for the ‘cult’ of Thomas Becket. Friend of Henry II and Chancellor of England, Henry offered him the post of Archbishop believing he could control the church through his friend. Thomas threw off the riches of the chancellor and embraced his pious role too enthusiastically for Henry.  It ended their friendship and Henry in a moment of bitterness wished him dead. Four knights took this request literally and as Thomas prayed at his altar, they ran him through with their swords, martyring him to sainthood. Henry, penitent and unpopular, had himself whipped through the streets. The shrine of St Thomas was a major pilgrimage site and the steps leading up to it are still worn down due to the countless pilgrims approaching on their knees. Henry VIII removed the shrine, tried the absent Thomas for treason, found him guilty and destroyed his bones.

Canterbury remains an amazing cathedral, steeped in history and complicated architecture and is a World Heritage Site. One of my favourites. I visited once when a choir were rehearsing Brahms Requiem on a Saturday afternoon. Cathedrals are so suited to that kind of music. One shopper (it’s in the centre of the city and an unexpected power cut had shut all the shops) sat listening with tears on her cheeks. I expect she’d never heard anything that beautiful sung in such surroundings before.

Beauty is in the eye of the beholder and not everyone finds modern architecture beautiful. When Coventry cathedral was ruined by bombing in WWII, it was left as a symbol of the devastation of the blitz. A new cathedral was built adjoining it as a ministry for peace and reconciliation – a specific purpose. Some like it, others don’t. I do like the stain glass and tapestry, the dramatic interior, but the building itself lacks the beauty of the Medieval architectural mash-up.

What is true about cathedrals is they are a living place and regardless of appearances, their role remains unchanged.