Known as the ‘most poetic of English cathedrals’ Wells is a jewel and memorable. Taking its name from the well that still springs up in the bishop’s palace garden, the site of the cathedral dates back centuries to when in 705AD the king of Wessex founded a minister church. This Saxon church was superseded in 1175 by the present cathedral. Looking at what makes Wells special means paying attention to the details.

Medieval builders didn’t always get things right first time. The high tower with its wooden spire proved too heavy for the foundations and cracks appeared in the tower. To save it, ‘scissor arches’ were put in by mason William Joy  and what a joy they are to behold. 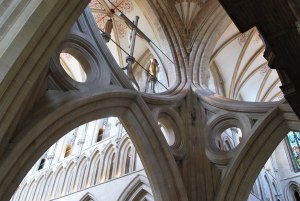 The West Front was begun at the time of the arrival of Gothic style. Bishop de Bohun brought the idea over from France and created a masterpiece as a backdrop for processions on festival days. It took nearly a century to complete.

The Jesse window dates from 1340 and nearly was destroyed during the English Civil War.  While the reformation of the Tudor period didn’t impact Wells cathedral too much, the Commonwealth (an eleven year period in England when there was no monarchy) saw cathedrals closed and bishops removed from power. Cathedrals were stripped of their finery and used for all sorts of things, including stables and prisons, until 1660 when Charles II restored the monarchy. Thankfully, the Jesse window survived.

The steps leading up to the chapter house are for me the most memorable (and most photographed feature of a cathedral). I can’t remember when I visited Wells, probably as a child, but those steps stick in my mind. The octagonal structure of the chapter house with its ribbed vault is built on top of the undercroft, which was the strong room of the cathedral, and is the only first storey octaganol chapter house in Britain. It was built in two stages and completed in 1310 and has 51 stalls lining the walls beneath the windows.  The chapter house is the meeting room, the business centre of a cathedral, monastery or collegiate church.  In monasteries, the community would gather to listen to the abbot talk and the monastic rules were read out – the chapters. In a cathedral chapter house, the bishop listened to the advice of the clergy, the canons or deans, who sat in their stalls. These meeting rooms came in all sizes and shapes: rectangular, square, octagonal or semicircular. Octagonal ones are quite common in England. 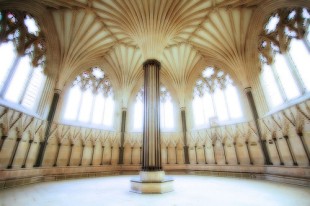 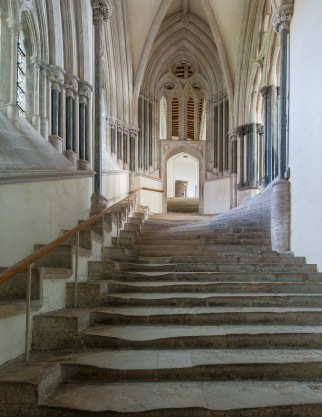 Lastly, there is the the Vicar’s Close, a residential street which was built mid-14th century to house the Vicars Choral – the chantry priests. The cathedral close is the area immediately adjacent to a cathedral and houses the offices of the diocese, the cathedral school, the palace of the bishop and other clergy. Every night it would be locked, hence the close. The presence of the close has stopped urban areas encroaching of the cathedral grounds, creating space including gardens and often a ban on traffic. A good place to sit on a sunny day. 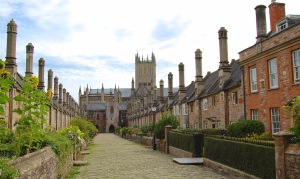