Finding a home for Xanthorhiza #atozchallenge

I picked my theme, the lesser great houses of Britain knowing that X would be a problem. There are no houses named X. However, houses come with an added feature – gardens. The beauty of many a house extends into its gardens. (Perhaps this should be next year’s theme?)

Searching for something special, I found this house in Enfield – Myddelton House gardens and the dedication of its owner Edward Augustus Bowles to the field of horticulture.

Myddelton House was built in 1812 for the Bowles family.  Originally replacing an Elizabeth house called the Bowling Green House, the new house was built with white brick imported from Suffolk. The house came to pass into the hands of EA Bowles who inherited through his mother and adopted her Bowles name through Royal licence so that he could inherit. Born in 1818, Bowles was a Huguenot by descent and he intended to join the church, studying divinity at Oxford. After a series of family misfortunes, he was left in charge of the estate. 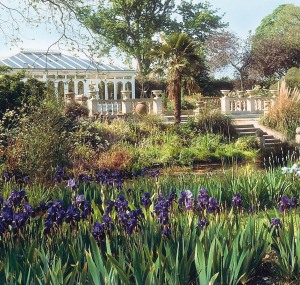 Bowles liked to travel, and he went as far as North Africa and brought back with him plant specimens. He became a collector of plants, especially crocus, of which he had over a hundred different species. Finally inheriting the house in 1918, he was encumbered with financial problems; he couldn’t sell the house, but neither could he afford to maintain it. He considered turning the garden into a semi-wilderness. But he didn’t, although he did create some original garden features, such as the Lunatic Asylum where he grew plants with unusual features. He taught himself horticulture and became an expert – the Crocus King – a member of the Royal Horticultural Society and was sought after for advice by Kew Gardens. He is now considered to be one of the 20th Century’s greatest gardeners.

One species he adopted was Xanthorhiza simplicissima, a yellow root, and the only member of the genus xanthorhiza. Found in eastern USA, from Maine down to Florida, where it is endangered, the plant contains an alkaloid used in dyes and medicines, and Native Americans produced yellow dye with it. Rare in the UK, Bowles cultivated it at Myddleton because he liked its ‘quaint beauty’.  Bowles was very protective of his rarer species. During the night he would go out with a torch and hatpin to stake slugs.

Bowles wrote many books and chaired many RHS committees right up to his death in 1954. His ashes were scattered over his rock garden at Myddleton.

Sadly Xanthorhiza is no longer at Myddleton. But for a while, it had a very nice home.

Pre-order for 99 pence – The Women of Heachley Hall – release date 4 May.