I touched on Landscape gardens with my post on Capability Brown. He wasn’t the only designer who had a habit of obliterating existing formal gardens and replacing them with picturesque landscapes. During the 18th century, the era of neoclassical architecture, estates were symbols of wealth and status. The grander, the better.

The scale required new ways of controlling natural growth. Sheep and cattle ‘mowed’ the vast lawns and meadows, and they roamed freely so no ugly fencing or walls were required. The low-lying ditch and wall of the ha-ha was an ingenious way of keeping the view pretty and animals off the best lawns. The important bit was to look grandiose – lawns that looked like meadows with irregular plantings of native trees and plants, ponds, lakes and rivers made to appear natural, and in some places, cottages were transported to give the appearance of a village life.

The larger park surrounding the house was called the wilderness. Paths meandered through this cultivated park giving the walker an opportunity to soak up the views and picturesque countryside. Nothing should ruin the view. Trees were moved or destroyed, hills raised or lowered, accordingly. Often all the labourers had to work with were basic tools: scythes for cutting grass, sheep clippers for trimming the edges of lawns, dibbles for making holes for seeds, and daisy grubbers for pulling up the daisies, which are still used today. For the large estates, between 60-100 gardeners might be employed to keep the illusion of natural wildernesses in hand. Scottish gardeners were especially sought after due to their training.  Staff often worked up to 60 hours a week, making sure the croquet and cricket lawns were in top-notch condition.

In 1830, the lawn mower was invented by Edwin Beard Budding, who got the idea from cloth cutting cylinders in a mill. The machine grew to accommodate a horse drawn version, although the horse had to wear special leather covers on its hooves to prevent it from wrecking the meticulous lawns.

As well as nature, stone was important. Follies were all the rage. At Castle Howard, the Mausoleum and Temple of Four Winds are big musts for visitors. The latter was used for dining and it has a basement where the servants prepared the food. 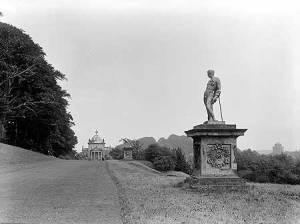 Chatsworth has the Great Cascade, which was designed by Monsieur Grillet, a hydraulics specialist who worked for Louise XIV. It took two years to build and was finished in 1696. The original one was remodelled in 1708 and further extended to twice the original length.

Prior Park Garden was created by Ralph Allan. Allan started out as a postmaster. He created a network of postal routes that avoided London, saving the Post Office thousands of pounds over 40 years, making him a wealthy man. So he decided to branch out into other businesses. He invested in stone and built Prior Park, concentrating on the garden before the mansion was finished. The poet Alexander Pope regularly visited and encouraged Allan to build a grotto and Serpentine Lake.  Three lakes are linked by dams with a Palladian bridge between two of the lakes – the lakes are incredibly blue due to the clay particles. The wilderness is home to a gothic temple built around 1754. Unfortunately after Allan’s death in 1764, the garden went into decline, but was reopened in 1996 to the public. 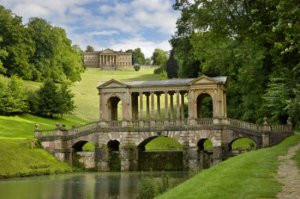 Stourhead, which I often confuse with Stowe, is another great place to visit. It was created by Henry Hoare, a banker and landscaper. The monuments are especially spectacular to view from a distance: the pantheon, designed by Henry Flitcroft, is an iconic backdrop for a great photo. 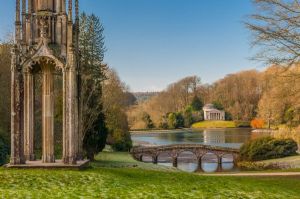 A final mention goes to Woburn Abbey and Humphry Repton, who has the honour of being the first person to be called a landscape gardener. Unlike Allan, he was a failed businessman, but fortunately a great gardener. In 1804 the Duke of Bedford invited Repton to landscape the grounds of Woburn Abbey. Repton preferred to fine tune the landscape. In contrast to Brown, whose parks swept up to the front of a house, Repton kept the terraces and flower beds as borders around the house. At Woburn he created Chinese and American gardens, and an arboretum. For every client, Repton kept a record in a red leather bound book which included sketches, maps and plans. Some survived.

So did landscapers do nature a service or disservice? The designers certainly had a love of natural scenery and everything picturesque, but they still wanted to control nature and turn it into a piece of art. Perhaps, they were too polished and grandiose.

Do you like to read about free chapters and short stories, or find out more about your favourite author including their work in progress?

Interested? Then sign up for my reader’s club newsletter: Rachel’s Readers and you’ll receive a complementary short story.