Topiary – the art of the tree barber

We’re accustomed to seeing art in the form of sculptured stone or clay, even ice, but there is another, which is cheaper, and offers longevity if maintained correctly, and often forgotten – topiary – the art of shaping shrubs and hedges.

Topiary dates back to classical antiquity, and supposedly invented by a friend of Emperor Augustus in the first century. Pliny the Younger described animal forms in the gardens of Laruentum. Yew and hollies were trained through careful pruning and gentle snipping into shapes and architectural forms, planted in terracotta pots and placed in the ornate gardens of the Empire. Topiary is Latin for landscape gardener, although the trimming was probably carried out by slaves given that it is labour intensive. Other evergreens used in topiary include box (a bit smelly), cypress, rosemary and box honeysuckle.

Monks kept the art alive in their herb and knot gardens, as illustrated at Wenlock priory in the form of animals. The chosen forms are ephemeral in topiary. No plant will survive for centuries, but often the shapes live on when the originals are replaced with new plants.

Topiary was revived by the Italians during the Renaissance, as currently illustrated at Wrest Park with its parterres and shaped laurels in pots. It spread to France – there were thousands of trimmed trees in pots at Versailles, then north to the Netherlands and England, where it gained popularity during Elizabethan times. Kenilworth Castle has a recreation of an Elizabethan garden with its parterre format and little shaped shrubs. 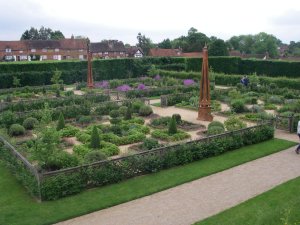 By the 17th century there was a healthy trade in ready made topiaries being sold in the finest London nurseries. Topiary specialists went by several names – tree barber, tree mason and my favourite, leafage sculptor. The best examples proved not to be in Italy, but The Netherlands and England, where stone was expensive to carve but there were plenty of suitable plants. However, the landscapers like Capability Brown were not a fan. They preferred the natural look, so topiary hedges were allowed to grow out and take their natural forms. For a while, the art was lost. However, the Art and Craft Movement of Victorian high style loved it, especially when placed at the centre of carpet bedding in their urban parks. Then the world changed again, and by 1900 the labour intensive upkeep of the hedges was too much – all they had were garden shears and clippers. The loss of staff at estates during the wars led to the dramatic decline in topiary.

Thanks to the arrival electric hedge trimmers, topiary is back and many gardens have reintroduced it. Examples include the architectural, such as Athelhampton with its yew pyramids, and the abstract, such as Montacute House’s ‘melted’ hedge and Walmer Castle’s ‘cloud’ hedge (including Wellington’s profile). Both of these were inspired by a natural disaster. The heavy snowfalls of 1947 crushed the hedges, misshaping the topiary, but the aesthetics stuck and now they are kept that way. 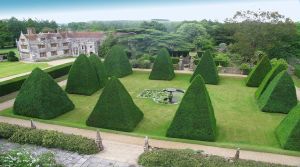 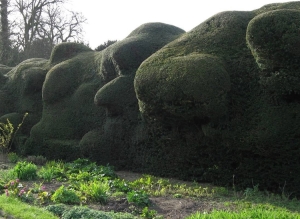 Wellington at Walmer – spot the nose?

Finally, a word about Biddulph Grange Garden, which started life in the 19th Century. James Bateman (1811-1897), a horticulturist, acquired Biddulph and bought specimens from the plant hunters of the time and also from his father-in-law, the owner of the biggest nursery of the day. The garden represents the interim period between the Capability Brown landscape look and the Victorian revivalists. It’s pretty quirky with its pinetum, Egyptian and Chinese gardens and topiary. For many years in the 20th C it was an orthopaedic hospital, and the terraces were filled in to create a lawn for wheelchair patients. The National Trust dug out the terraces and replanted, creating the Dhalia walk with its dark yew hedges shaped in the form of stepped buttresses, offsetting the colourful flowers. It looks good in winter too, which is one of the beauties of topiary – it works all year round.