The concept of a touring theatre group is nothing new. Its origins go back much further. Ever since Antiquity, plays have been performed, and in the absence of great amphitheatres, towns and cities were home to pageants and feasts, bringing music and drama to the streets.

Perhaps the most famed of these are the mystery plays, a cycle of performances that spoke to the ordinary people in language they could understand. Although developed by churchmen, there was no Latin or impenetrable liturgy. The mystery plays can be up to 50 stories, each depicting biblical scenes from the Creation to The Last Judgement. The cycle took days to perform, and involved thousands of lines of rhyming text, many speaking parts and the elaborate arrangement of living tableaus – think of the nativity scene, and multiple it into many more. Things really took off in the 13th Century when the stricter religious elements of the plays began to breakdown, allowing the performers to introduce satirical elements that mocked officials, including the priests themselves. 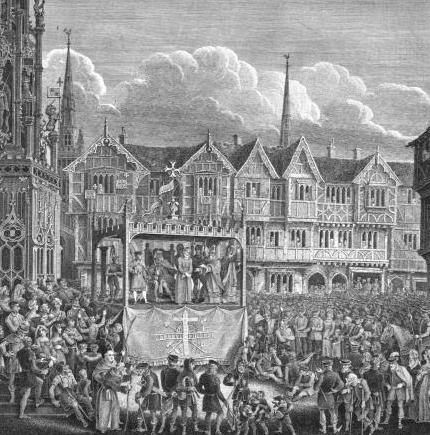 The plays are organised by the Guilds, the craftsmen of the town, and performed on pageant wagons which act as stages and dressing rooms. Mystery plays are still performed in England, and the most well known are at Chester and York. In York, seven guilds are responsible for different pieces of the scriptures.  Given the organisation required, York only put on the mystery plays every four years, Chester every five.

In the Middle Ages, the pageant wagons trooped around to twelve playing stations designated by banners. There are forty-eight scripts making up the York Mystery Play, but in the modern version, only a handful are picked. Both professional and amateurs perform side by side, now as back then, in a variety of scenes that range from extravagant to simple and intimate.

The mystery plays suffered a major demise in the 16th Century. Their religious content was considered dubious with their rambling verses, and the Reformation wasn’t keen on them either, believing them to be of Roman Catholic influence. Professional travelling theatres moved around Europe, and the public preferred them to the amateur guilds.

The revival of the plays is relatively recent – the twentieth century.

A pity it took so long, because there was plenty of innovation in these early plays – mechanical devices, trapdoors, flying angels, monsters and miraculous transformations. Even now, the revived version requires the logistics of a professional pageant master, a director of music, and events manager, plus the involvement of local schools, communities and theatre groups. It’s no surprise that both Chester and York only put on these plays every few years. They’re packed out. I saw one in Chester, in a marquee in the grounds of the cathedral. Chester makes use of the Cathedral for its plays; York continues to use wagons.

The last York play was in 2018, their twentieth, and involved eleven of the original cycle – here’s some of them.

One of the Creation’s plays was performed by the York Guild of Builders: The Plasterers’ Play – The Creation of the World to the Fifth Day.

The Coopers’ Play (part of the Temptation) was performed by a local school on behalf of the Guild of Freemen.

Betrayal includes the Glovers’ Play: Cain and Abel, and was performed by a group from the University of York on behalf of the Company of Merchant Taylors.

The Judgement, the end of the cycle, was performed by the Raven’s Morris (Morris dancers) on behalf of the Company of Merchant Adventurers.

I love how the local communities represent these ancient guilds and connect the past to the present. The stories are still presented as they would have been in Medieval times: humorous, dark and dramatic. The music and processions, the costumes and props, all may seem humble, but they are true to the origins of the plays. 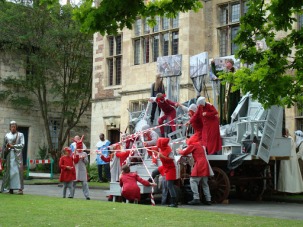 York is planning to unleash the wagons again in 2022, and once more theatre will return to the streets.

← X – Crossing the stage
Z-Arts and the theatre community →