Glemham Hall features a characteristic Georgian façade constructed in front of an old Tudor hall, which once would have a been a grand example of early renaissance architecture. This ‘covering’ up of the old frontage is quite common for England’s Medieval buildings and the give away is the bottom of the roof doesn’t meet the frontage; it sits behind it. These stone or brick walls give a robust appearance to an often wonky house built out of timber. 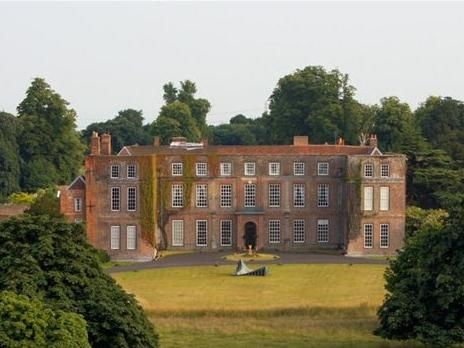 Another feature of Georgian style is the square windows uniformly arranged in a grid. This was also an attempt to reduce the window tax.  During Georgian times, the number of windows the property possessed was used as a measure of how much tax the occupants had to pay. Poor people living in cottages had fewer windows. As a result, it was common to brick up the windows of wealthy homeowners in order to reduce payments.

Georgians were inventive with their ideas for taxes. Previous tax initiatives included:

The brick tax introduced in 1784 to pay for wars in the American Colonies – 4 shillings per thousand bricks. In reply, bricks got bigger, so the government changed the rules about brick sizes and enforced smaller ones. Industries, who built the largest buildings, failed as a consequence and the tax was scrapped in 1850.

In 1709 candles (beeswax) were taxed. This impacted the poor greatly who couldn’t afford large glass windows in their homes. To make life harsher, making candles in the home was forbidden. People resorted to dipping rushes in animal fat and lighting them at both ends – tax free. Hence the expression “burning the candle at both ends.”

Clock tax of 1797 lasted nine months. Why? It cost five shillings for every clock in a private home, plus ten shillings for gold ones, and since it was the rich who had clocks, not the poor, it didn’t go down very well.

The gin tax in 18th century London caused riots; the government was actually trying to decrease laziness and crime. Although not withdrawn, the tax was greatly reduced.

There were also taxes on hats, playing cards, soap and medicine. Even pre-printed wallpaper was taxed – a penny for a square yard. Ingenious people bought plain paper (untaxed) and stencilled it. None of these impacted the home as much as the window tax. To this day, you can spot bricked up windows.  Although, I do think Amsterdam’s tax on the width of houses probably tops the league for architecture determined by taxes.