Haddon in a hurry #atozchallenge

Built in 1200s as a fortified Medieval manor and then lived in as a home until early 1600s when it was left dormant for 200 years. Consequently, it skipped over the Georgian period and remains a largely Medieval building.

In 1920s the Duke and Duchess of Rutland began to restore the house and gardens.

No, there has to be more to a house than a couple of lines.  Try again.

The Vernons acquired the manor of Haddon by a 12th Century marriage between Richard de Vernon and Alice Avenell.  Four centuries later, Dorothy Vernon married John Manners, the second son of the 1st Earl of Rutland. The story goes that John’s father forbade the marriage. During a ball, hidden by the crowd, Dorothy picked up the skirts of her ball gown, slipped into the garden and over a bridge to where John waited for her, and the couple rode off into the sunset and married. Possibly a romantic twist on the tale, because John did inherit the estate two years later, so his father couldn’t be that miffed.  John’s heir became the Duke of Rutland but chose to live in Belvoir Castle. Haddon Hall lay unaltered for two centuries and keeps its Jacobean appearance.

The 9th Duke began a long period of restoration to the house which included the banqueting hall, kitchens and parlour date, which date from 1370s, and the chapel, which was completed in 1427, and then covered in whitewash during the reformation to hide the colourful frescoes. Now they are visible once again, although not as colourful.

Haddon Hall has a strong connection to literature and arts, including a light opera Haddon Hall, by Authur Sullivan, a novel titled Dorothy of Haddon Hall by Charles Major (1902) and three versions of Jane Eyre, the last being in 2011, have been filmed at Haddon.

What stands out for me is the restoration work. Instead of altering the house, as the Georgian or Victorian’s often did by stamping their fashions on a building (and this is how we see these old houses because time seems to have frozen them in these periods), Haddon has been kept as a largely Medieval property. (No doubt with modern conveniences on the inside.)  Whether it is the stone work, the glazing or mortar, the restoration hasn’t over-reached itself.

The restoration and repairs at Haddon Hall still continue nearly one hundred years after they had started. So nobody is hurrying at Haddon. 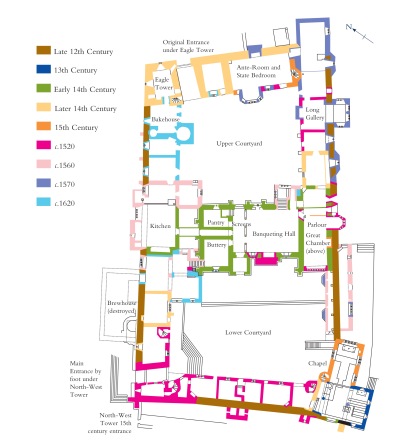