Nunnington Hall in Yorkshire, as it stands now, is the creation of the Viscount Preston, who was the owner in the late 17th Century, but there has been a house there since the thirteenth century.

There are plenty of rooms – the stone hall, dining room, the oak hall, the drawing room and bedrooms, mainly recreated to represent 17th and 18th century décor with paintings, panelling and stone fire places. 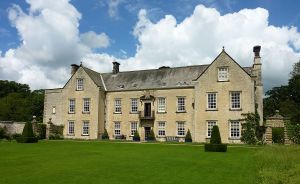 But there is more to see than these rooms. Since 1981 Nunnington has housed a special collection of rooms – miniature rooms. The collection was created by Mrs Carlisle (known fondly as Kitty) and began with a few pieces of Indian miniature silver in her house in London. Over forty years from 1921, she continued to collect periods rooms and their contents. A keen embroider, she made her own carpets and upholstery, and commissioned skilled craftsmen to construct rooms with furnishings and fittings. 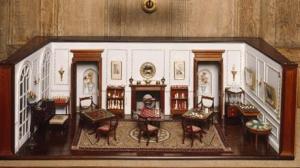 We think of dollshouses (dollhouse in the USA) as a child’s toy, but for centuries they were an adult hobby and the custom of re-creating houses or rooms goes back centuries, in fact thousands of years to Egyptian times – wooden models were found in the tombs of the Old Kingdom. 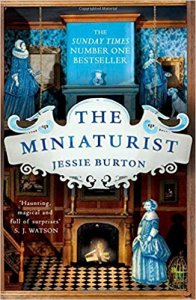 Bestselling book that the BBC made into a series.

In 16th century Europe, dollshouses were known as baby houses and displayed in a cabinet made up of individual rooms. They were solely for adults and prized collections. 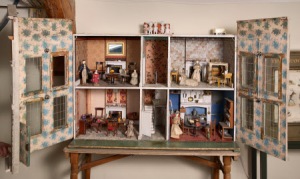 These early dollshouses were custom made to individual specifications. However, by the time of the Industrial Revolution they were being mass produced. German companies were renown for making them, as were the English, and by 19th century the Americans were on board and continued to rise in popularity after German production declined following WW1.

By the 1950s houses were made from metal and plastic, rather than wood, and they shifted from adult collectors to children, especially girls.

My eight room dollshouse complete with staircase and all round viewing 🙂

These days dollhouse collectors are serious hobbyists, not only buying the house and furnishing it, they focussed on themes, eras, decorations and even added electricity and lighting. One of the most famous dollhouses is on display in Windsor Castle – Queen Mary’s dollhouse – which was made in 1924 by Edwin Lutyens, a famous architect.

The Dolls House Emporium catalogue (one of the UK biggest providers) is addictive – pages and pages of objects and houses to buy. By the time I’ve finished perusing it, I’m itching to have a go myself.

We don’t have a fancy dollshouse. The one my kids play with dates back to the 1960s and was custom made for me when I was a child. So it something special. I covered it with garish seventies wallpaper (now stripped off), and metal kitchen cabinets and hand stitched upholstered chairs. Now, all sadly lost. So, I went to the ‘junior’ section of the Emporium catalogue and bought new things for it, specifically choosing wood, rather than plastic. Not quite as grand as the old dollshouses, I am at least continuing the custom of collecting miniature rooms.