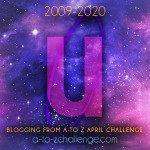 There’s a huge amount of theatre craft, it’s a topic that I haven’t really covered because I’ve focused on the buildings. There is also the terminology, the theatre words.

I’m picking one, and see where it takes me.

The easiest definition is that it involves moving to the back of the stage, as opposed to downstage, the front. End of. 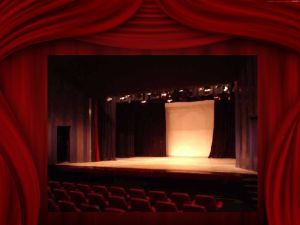 Some thoughts come to mind – the actual backstage is the behind the scenes area. It’s out of sight to the audience, it’s where the actors and technical crew mingle in dressing rooms. The front of the stage, where it projects into the auditorium, is known as the apron.

Then there are all kinds of upstages – the left, right and centre.

Where did the ‘up’ part come from. Because you would have thought the front part is up, as is in up close to the audience, and down is at the back, and away from the audience?

We need to go back in time to Elizabethan England. Theatre stages were raised above the pit, where the crowd stood. To make it easier to see and hear the actors, the stage was sloped, or raked. The slope could be quite steep, these days, it is less so – about five degrees.

Back to Shakespeare’s time. Imagine the unruly crowd, catcalling from just below the stage. The posh folks are safely tucked into the boxes, and raised, they can see the play from above. It helped that the actors could move to a higher position. “Raking the stage” meant the actors move across the stage – up and down. These positions – upstage and downstage – stuck long after the rake fell out of fashion. In most theatres, the stall seats are raked, placed on a rising slope or are built level with the stage in the first place. 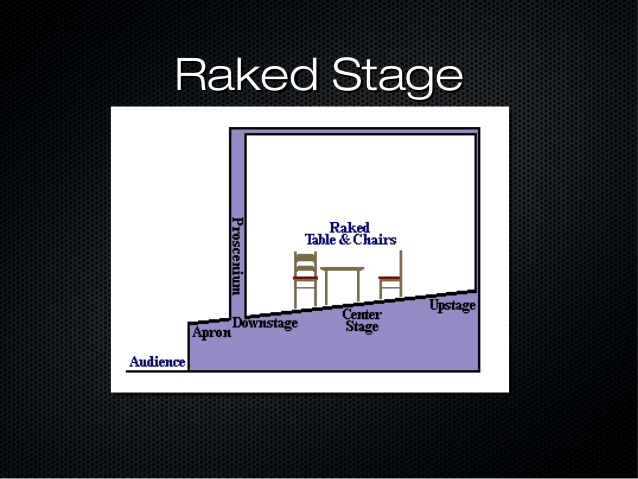 Performing on a raked stage is a little fraught. Accidents happen. Dancers get vertigo, actors are unbalanced. The degree of raking varies from theatre to theatre. Here’s some examples in ratios – so for every 1cm vertically, the stage goes back so much horizontally.

As you can see, many I have already covered in this blog. There are others across Britain, these are the London ones.

There is one last thing about upstage – it’s more than a location. On a raked stage the actor moving upstage is elevated. The actor downstage has to turn their back to the audience in order to address their fellow cast member, even though they are closer to the stalls. All actors want to face forward when speaking their lines.

The modern parlance of “upstaging” means to unscrupulously draw attention away from another. You can see where it comes from, can’t you?

Personally, I think it depends on your perspective. 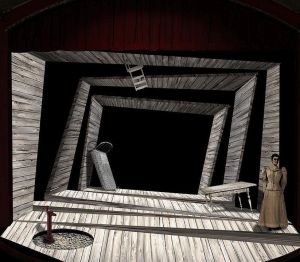 Here’s a link showing the construction of a temporary raked stage : Cat on the Hot Tin Roof.